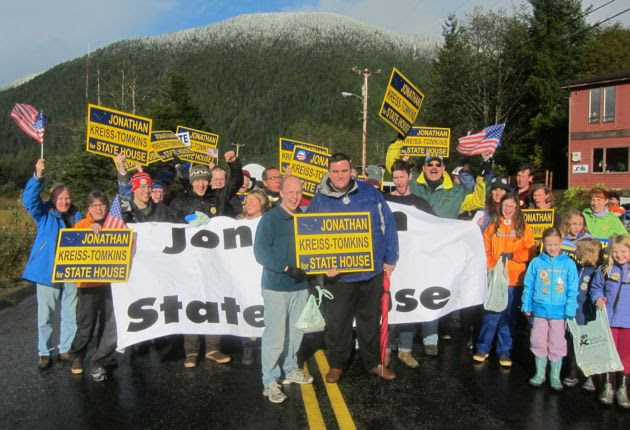 By Scott McAdams
Politics have always been important to Alaskans. Unlike much of the world, we often know our leaders personally, expect our ideas to be considered in the policy making process, and understand that our future requires our voice. As many of us evaluate candidates this election season, most of us in this small community called Alaska do so based on the personal relationships and past experiences we’ve had with those who place their names on the ballot.
In my community, there is a race for State House between two men I have come to know over the past several years that I believe represents a choice between two very different trajectories for Alaska. While we have so many races to support and great candidates to encourage this fall, I believe there is no greater contrast nor more important victory to be won than the bid of Jonathan Kreiss-Tomkins against Bill Thomas in the newly formed HD 34.
Bill Thomas, a known opponent to public education and former contract lobbyist who has supported sending billions in Alaskan oil wealth back to Houston and London, seemed to think until recently that he had this race in the bag. Relying on king-maker politics, Thomas has sat on his hands and expected old cronies to line up votes for him. Little did he know that a door knocking machine from Sitka would ask nearly every person in the district for their vote directly.
When I was the president of the Sitka School Board, as Jonathan crossed the stage with diploma in hand, I asked him to come home and lead us one day. I couldn’t be happier that he has decided to do just that. Jonathan’s career in political service began in the eighth grade as online organizer for the Dean for America campaign, a position that garnered him national media recognition. During my time as mayor, Jonathan was a trusted advisor on issues of public policy and good government. As a candidate for State House, Jonathan has distinguished himself as a dogged campaigner who has through action shown his energy, intelligence, capacity and promise.
No one is working harder than Jonathan, and that hard work is paying off. A recent poll has Jonathan three points ahead of his opponent, his campaign has outraised Thomas in the last two consecutive fundraising periods, and Jonathan has more individual contributions than any other State House campaign in Alaska. This is a race he can and will win, but only with your help.
Will you support a candidate who hopes to govern with ideas vs. another who plans to rule with power? Will you support rational idealism over abject cynicism? Are you tired of arrogance and long for humility in elected leadership? Will you join me in supporting Jonathan?
at 2:54 PM